Travel Tips: How to Celebrate the First Day of Mardi Gras Carnival in New Orleans

Today, even though it’s raining in New Orleans, we are happy to celebrate the beginning of our Mardi Gras Carnival season by parading and eating king cake. Mardi Gras season always begins on January 6th of each year and ends on Fat Tuesday, the day before Lent. The first parades are supposed to roll tonight, but rain has interfered, and a few are postponed. The first parades of the season are always that of Phorty Phunny Phellows and Joan of Arc. 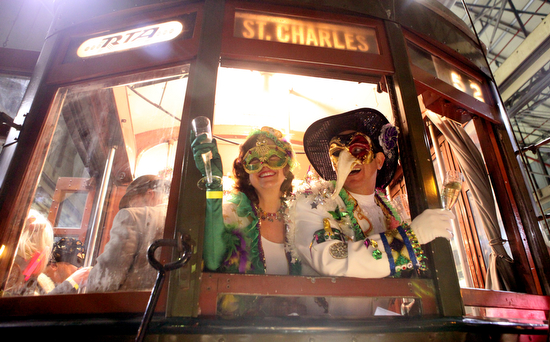 Phorty Phunny Phellows, a streetcar filled with costumed revelers, has paraded down St. Charles Avenue since 1878. At this time, the Krewe of Rex was only six years old, making Phorty Phunny Phellows one of the oldest carnival traditions in New Orleans. If you are visiting our city and love hijinks and satirical mockery, then you should make plans to attend the nonsense on January 6. Click here to learn more about Phorty Phunny Phellows and see the parade route.

The gilded bronze statue of Saint Jeanne d’Arc, a symbol of our French cultural heritage, was a gift from France in 1972. The statue is an exact replica of the famous 1880 Emmanuel Fremiet equestrian statue of Joan located at Place des Pyramides, Paris. For nine years, the Krewe of Jeanne d’Arc honors and celebrates the story of the “Maid of Orleans” and our French heritage with a whimsical and artistic walking parade throughout the French Quarter. This medieval-styled parade is set in the 1400s and features elaborate costumes, traditional music, horses, jugglers, knights, stilt walkers, giant puppets, king cake, and unique handmade throws. Our favorite location to view the parade is in front of St. Louis Cathedral. The parade is concluded with a King Cake Party at the Statue! Click here to learn more about the parade or see the parade route. 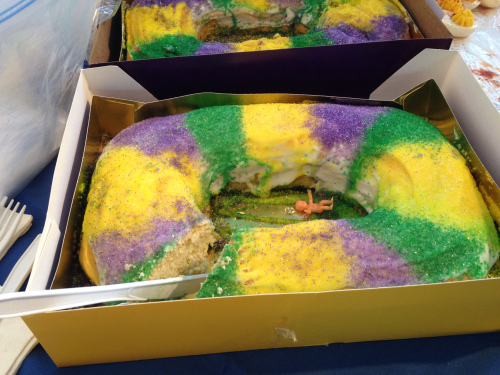 One of the wonderful traditions of Mardi Gras, and probably the most delicious, is the King Cake.  King Cake parties are held throughout the Mardi Gras season in offices, classrooms, and homes throughout the city. Like the Biblical story, the "search for the baby" adds excitement to the tradition, as each person waits to see in which slice of cake the baby will be discovered. While custom holds that the person who "finds" the baby will be rewarded with "good luck" and crowned King of the party, that person is also responsible for bringing the King Cake to the next party or gathering. The cake itself is made from twisted strands of cinnamon dough, frosted and sprinkled with purple, green and gold colored sugar. Most people throughout Louisiana like King Cakes that have the added fillings in various flavors such as cream cheese, strawberry, bavarian cream, raspberry, cherry, or praline. One of the unique flavor combinations is that of the Zulu King Cake, which has chocolate frosting and coconut filling and honors the legendary Zulu parade on Mardi Gras day.

A Message from Royal Carriages

We look forward to celebrating Mardi Gras with you in addition to providing you with the most authentic New Orleans experience. Throughout the Carnival Season in New Orleans, expect to learn added history of our Mardi Gras parades, costumes, traditions, and more on your mule-drawn carriage tour.

Throughout the carnival season, our mule-drawn carriages will continue to provide visitors the most authentic way to tour the city, but we will be closed for business beginning February 23, 2017 and won't reopen for business on March 1, 2017. Furthermore, mule-drawn carriage tours of the Garden District will be suspended from February 12, 2017 until March 2, 2017.

Happy New Year and Happy King's Day from everyone at Royal Carriages!

Every time we go to New Orleans, we have avoided the touristy carriage rides. My daughter begs to go on a carriage ride every time and we finally gave in during our last visit. The carriage ride takes you through the French Quarter while your carriage driver gives a little bit of history and points out architectural interests. We were all most interested in the history of the Great New Orleans Fire where the priests did not allow the church bells to be rung as fire alarms. The ride and the history lesson were both entertaining and just long enough.